The U.S government has an official plan for a Zombie apocalypse

CONPLAN 8888 also known as Counter-Zombie Dominance was written in 2011. And just in case you think it’s weird bureaucratic humour, the first line reads, ‘This plan was not actually designed as a joke.’

In 2011 a plan drafted by the U.S. Government called CONPLAN 8888-11, “Counter-Zombie Dominance” was revealed to the public. The document details a strategy to defend against a zombie attack. And, yes, it’s real.

We verified that the U.S. Government did in fact publish this report. And while reading it, we discovered some truly fresh thinking. In its own way it was innovatively brilliant—especially coming from a place where we might not expect such creative thinking, the United States Government.

Creators of the tongue and cheek “Counter-Zombie Dominance” document purposely chose zombies to disrupt their own tired-out thinking. The design of the plan produced serious strategic value. It is used to help defence plan creators and trainers explore unexpected, unplanned-for threats and learn how to strategically develop defences for any possible variable or threat. 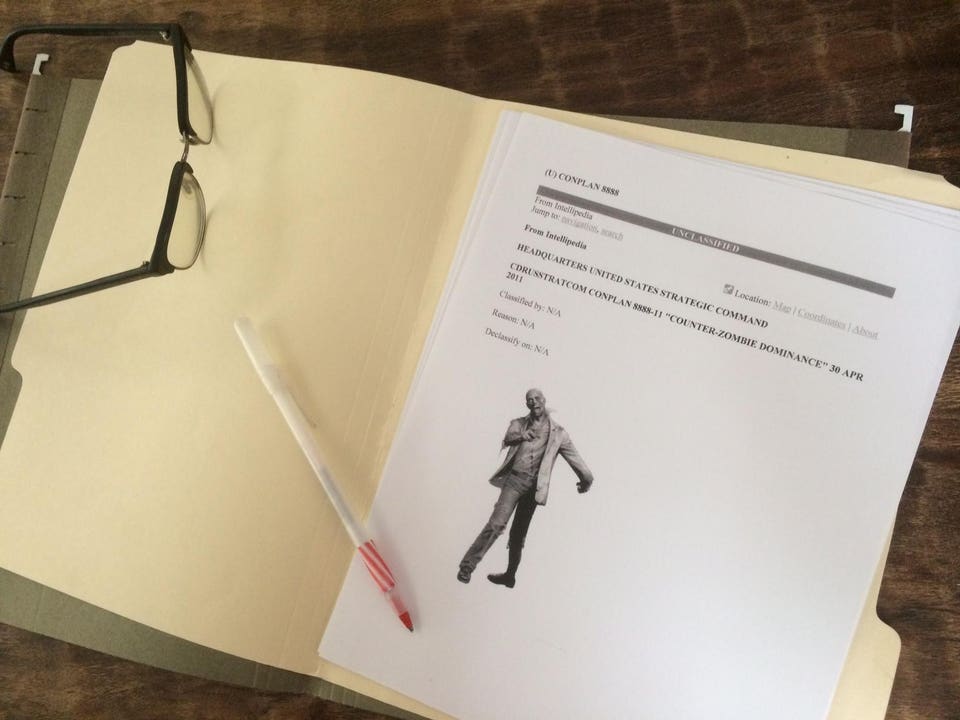 According to the DISCLAIMER in CONPLAN 8888-11, document creators write, “This plan was not actually designed as a joke. During the summers of 2009 and 2010, while training augmentees from a local training squadron about JOPP, members of the USSTRATCOM component found out (by accident) that the hyperbole involved in writing a ‘zombie survival plan’ actually provided a very useful and effective training tool.”

Basically, planners realized that disruptive political fallout could ensue if they were to train using specific named enemies. By using zombies as the enemies, planners avoided the risk of the public assuming there was a real current threat, but more importantly they opened a new level of thinking—the fictional nature allowed planners to break out of their old mindsets.

Even more interesting was the document’s release to the public. The writers of the plan stated in the DISCLAIMER, “Our intent was to place this tool ‘into the wild’ so that others who were interested in finding new and innovative ways to train planners could have an alternative and admittedly unconventional tool at their disposal…”

Basically, planners were having a blast with the new, innovative way of thinking. And, it worked. But, should “out-of-the-box thinking” really mean “out-of-this-world thinking?”

We all have comfort zones. We all can get stuck focused on the reality and seriousness of our businesses. Playing with ideas like a zombie attack might at first seem like a juvenile and pointless approach to problem solving. But, look at how it opened the eyes and ideas of those in the U.S. Government—a group who takes their jobs extremely seriously.

If you’re looking for some fresh thinking, consider stepping out of the comforts of your day-to-day business and into your discomfort zone.

Here are some guidelines to getting “uncomfortable”:

1. Identify your own zombies: What are the biggest potential threats to your business? What is it about them that reveals your own vulnerabilities. Do the threats exist because of a real weakness in your business model, or because you just don’t want to change your business? If you came up with an idea to neutralize the threat, what would that look like? Who would fight you over it? Why?

2. Dump Your Inner Circle for a Day: Look for perspectives of people who may not agree with you. A study conducted by Forbes Insights and the O.C. Tanner Institute which culled through 1.7 million cases of award-winning work, found that people who reached beyond their inner circle, to purposely have conversations with people who may have opposing, different, unbiased or even outlandish perspectives are 3.4 times more likely to create bottom-line financial results.

3. Find the Opposites and Opportunities: One of the most interesting aspects of CONPLAN 8888-11 was that the planners even removed and reversed fictional stereotypes of zombies. Vegetarians? Really? Consider product innovations that  bring opposites together. For example, what if you could offer the highest quality and the lowest price, like Costco did. By exploring the outlandish—and playing out “What would happen if…”, you’ll consider things you never would have thought of before.

When it comes to comfort zones at work, the scariest option is “no change” at all—because that’s when we all become the walking dead. Get uncomfortable and see what it does for new thinking and new growth.